Omahah beach was called the ‘bloody beach ‘ after the invasion. This was because of the heavy losses. 4000 casualties on D day as oposed to 600 on Utah beach.
There were several reasons why the beach turned into a blood bath, most of them were avoidable. One factor that wasn’t avoidable was the presence of an extra division of well trained german troops. Intelligence sources hadn’t pointed this out 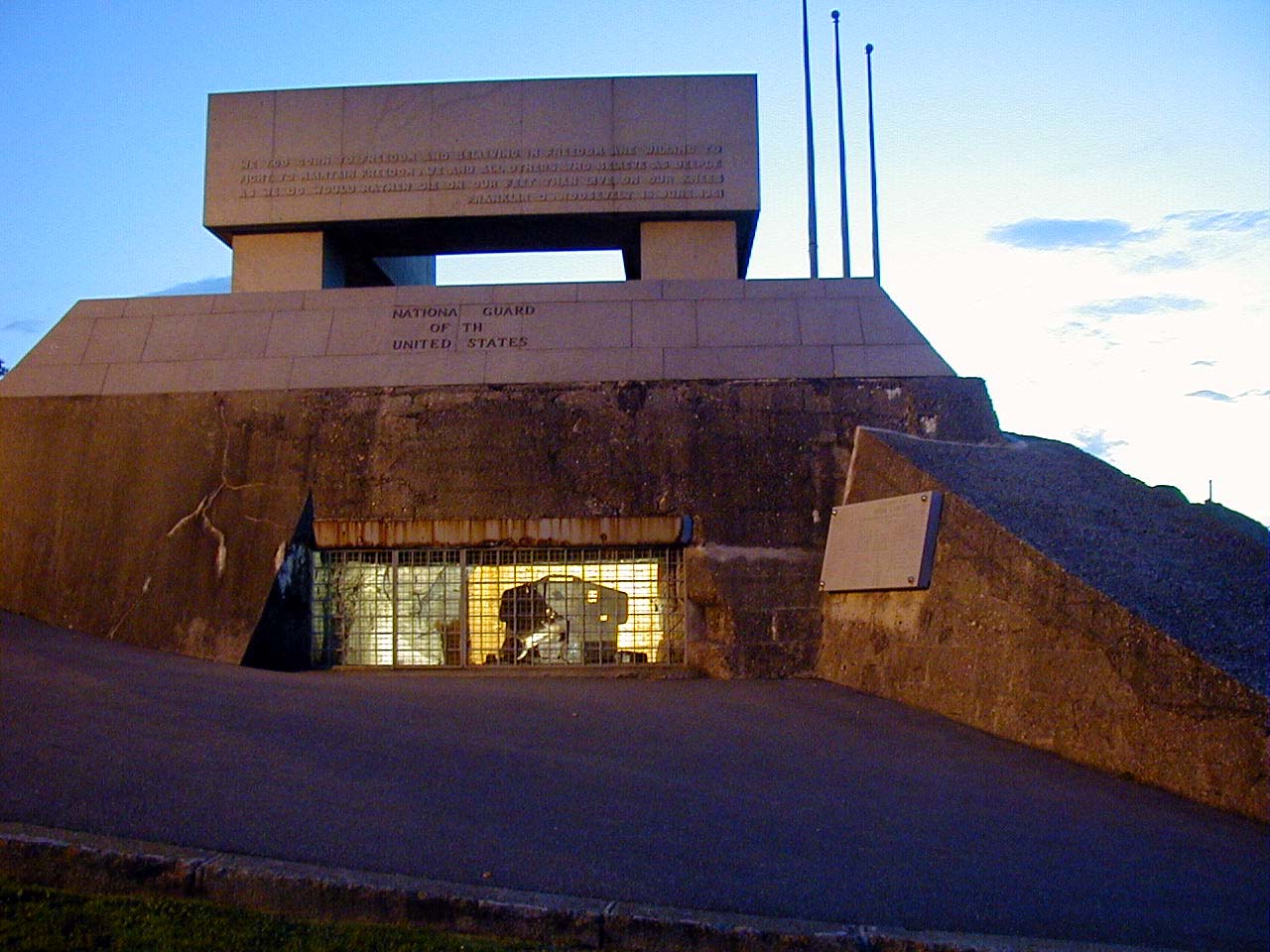 The defences were suposed to be bombed just before the landing but the bombing was way off course. The bombing of the british beaches had been slightly more efective becuase the bombers were bombing by sight. On Omahah beach they bombed by instruments. At that time instrument bombing was very inaccurate and the pilots were worried about bombing the landing craft as H hour approached. To avoid this they were ordered to bomb further and further inland as H hour got nearer.
In this way the first bombs fell just behind the german defences and the last fell 5 miles inland.
Omahah beach was the only beach that had naturally marshy ground just Í behind it then steeply sloping cliff. From anywhere on the cliff nearly all the beach can be seen. This was a perfect beach to defend. 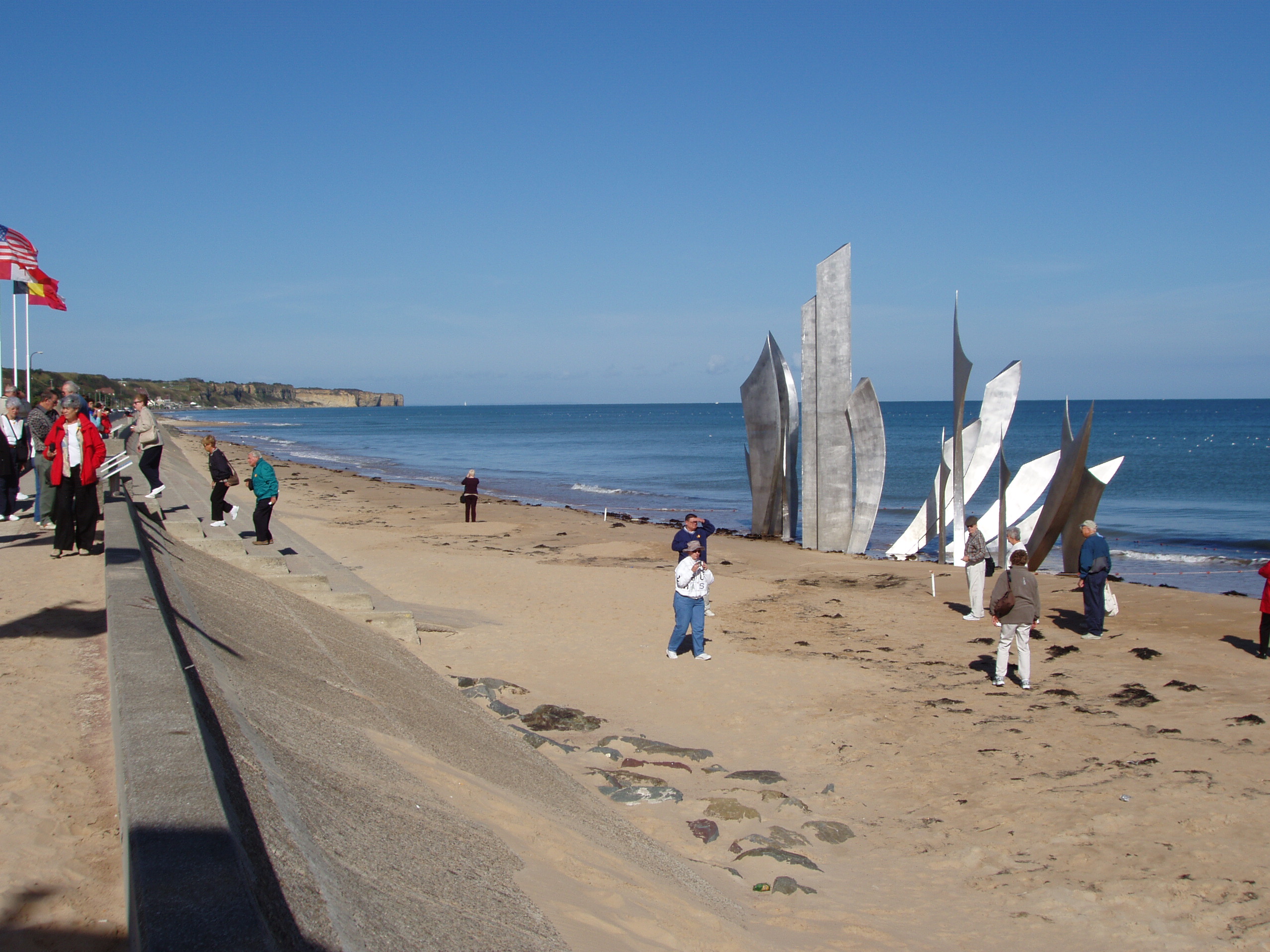 The landscape couldn’t be changed by the planners but they didn’t have to choose to land directly in front of the only beach exits which were most heavily defended.
Another bad decision was in refusing the use of the special tanks except the DD floating tanks. Half of these were lost as a result of the bad weather. They were carried in two flotillas of landing craft. The commander of each flotilla had the choice to ask the landing craft captains to take them right in if the sea was too rough. One commander decided to take the tanks right in and delivered them safely to the beach the other decided to lunch. Each landing craft had four tanks in and after watching the first tank drive out and sink the other three followed suit. Two tanks of this flotilla were saved because one ripped it’s canvas skirt in the landing craft.
The beach lies to the east Î of the Vire estuary between Vierville and Colleville . it is 4½ miles long and bordered at each end and behind by high cliffs. This was the only possible landing site in the 50 miles between Utah and Gold beaches.
Between the beach and the cliff slope was a band of marshy ground 500 Yds wide. The escarpment was pierced by four valleys which were the only possible vehicle exits from the beach. At the entrance to each valley the germans had installed clusters of defensive positions. 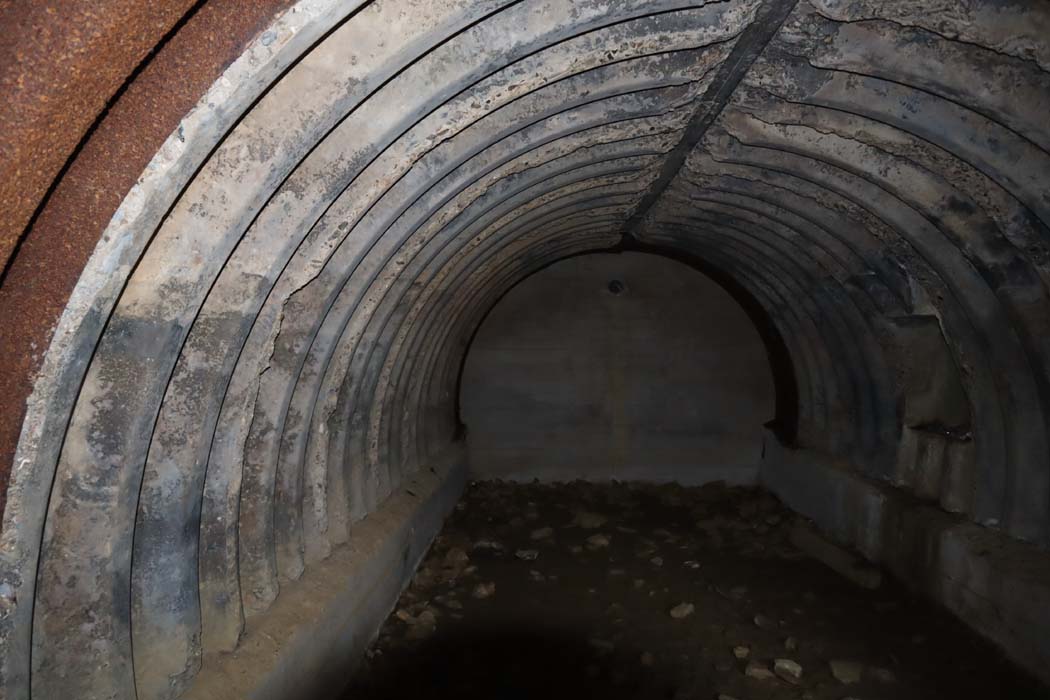 There were pillboxes, anti tank guns, machine gun nests, morters, and tank turrets mounted on concrete bases.
They were all set up to fire along the beach and protected from naval fire by thick walls of reinforced concrete. On the slopes in between the valleys the defences were less concentrated but the escarpment was covered with mines. As if all that wasn’t enough this part of the coast was manned by a well equiped and well trained division, whereas most of the troops elsewhere were invalids and pressed men.
The landing was timed to start at 6.50, and their troubles started even before they landed. The weather was rough al through the channel but the shape of the coast influenced the sea conditions along it . At Utah the wind was off shore , but at Omahah it was on shore and whipping up waves of four feet. This caused difficulties for the landing craft and resulted in the loss off half the assault tanks.
Below high water mark the beach was strewn with obstacles, some mined and some with sharp pionts. There were 16 teams of demolition men to blow 16 paths through thes obstacles. dome were lost with their landing craft, some were wiped out while they started work. some who started clearing the obstacles were hampered by soldiers sheltering behind the obtacle they were about to explode. Others managed to clear paths but the tide was pushed up faster than expected and they had no time to mark the path with bouys. With no paths marked , the landing craft had to take pot luck in getting through. 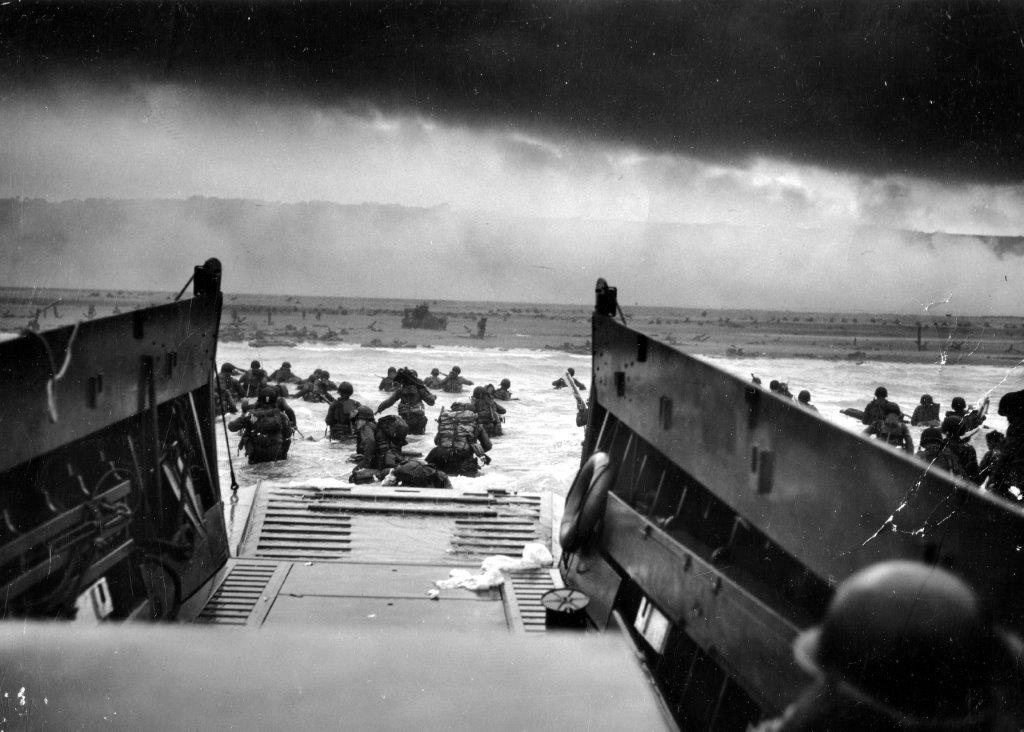 The only shelter on the beach was a shingle bank. The infantry crouched down behind this or dug foxholes for greater shelter. The few tanks that reached the beach couldn’t pass this shingle bank and the valleys were crossed by anti tank ditches and walls. The army had supplied armoured bulldozers to clear paths. Many of these were lost and those that arrived were hampered by the other vehicules.that kept landing and were being pushed up the beach by the swiftly advancing tide.
A message was sent back to the fleet to stop sending in vehicles. The situation was gatting hopeless. The losses were mounting and no vehicules were advancing off the beach. In the early afternoon General Bradley on the AUGUSTA considered abandoning the beach and send the forces through UTAH.
But although the germans had the advantage of the terrain theyonly had a finite strength. A pill box that was knocked out was irreplaceable. The allies had a practically inexaustable supply of men and tanks.
Two destroyers moved i n close to bring their guns to bear on the gun emplacements at Colleville. The german defences were slowly ground away and by 1.50 the message went through to the augusta that men had found a way through the mine feilds.
Once the weak points were breached the strong points could be taken from behind and in this way the beach was taken over.
Due to this early set back the bridgehead was only a fraction of the planned area. Instead of an area 15 miles by 6 miles they acheived a bridgehead of only 5 miles by 2. Colleville and St laurant were inside this zone but not liberated till the morning of the 7th. 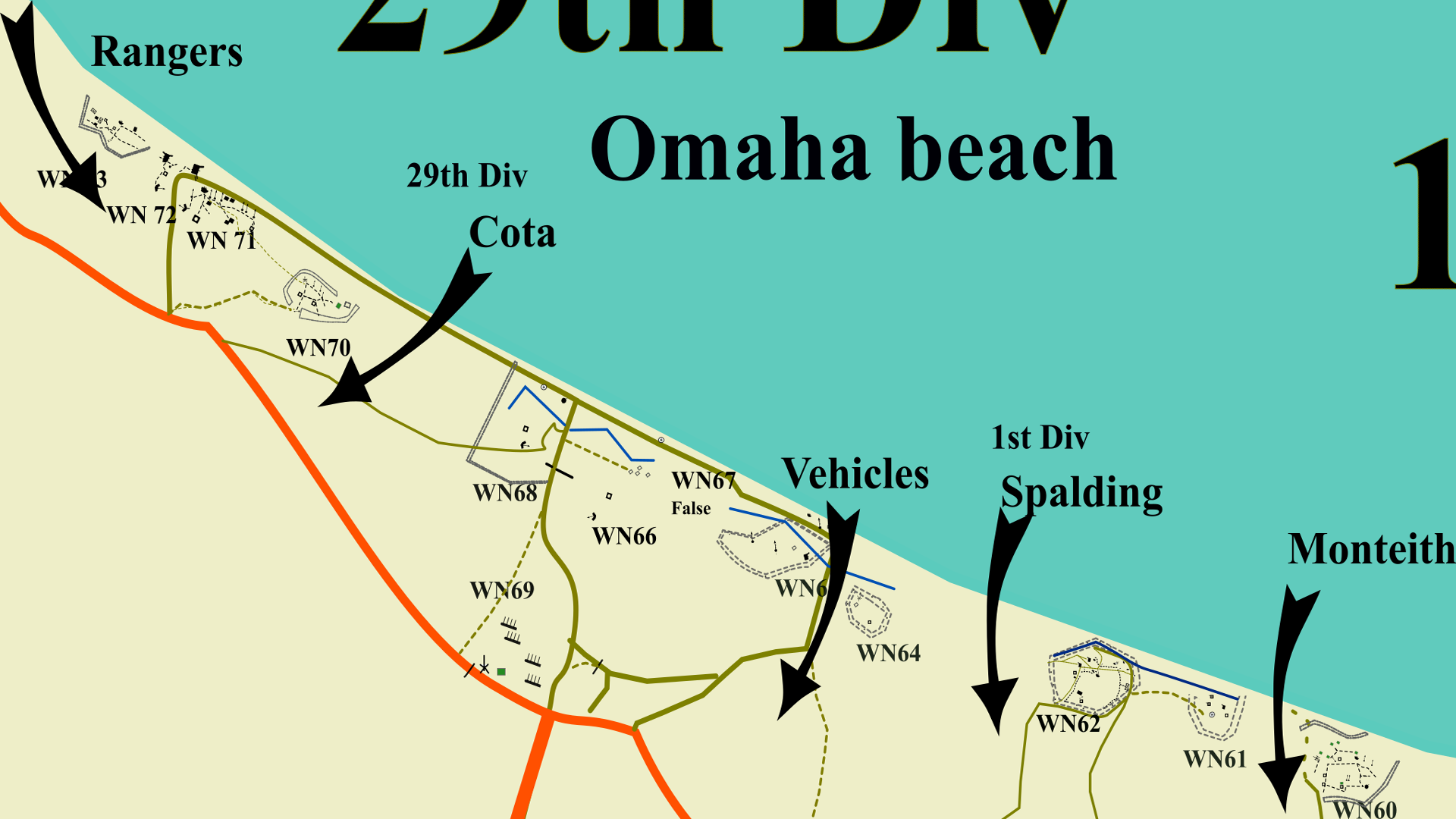 View from WN 62 on the Exit E3. It’s twin WN61 can just be seen in the buildings near the beach.
In the distance the Phenixes of Arromanche artificial port. A bit nearer the jetty of Port en Bessin