During the tour you'll stop to inspect around 15 sites with many maps to illustrate the actions, but visit 45 waypoints with information on each one. 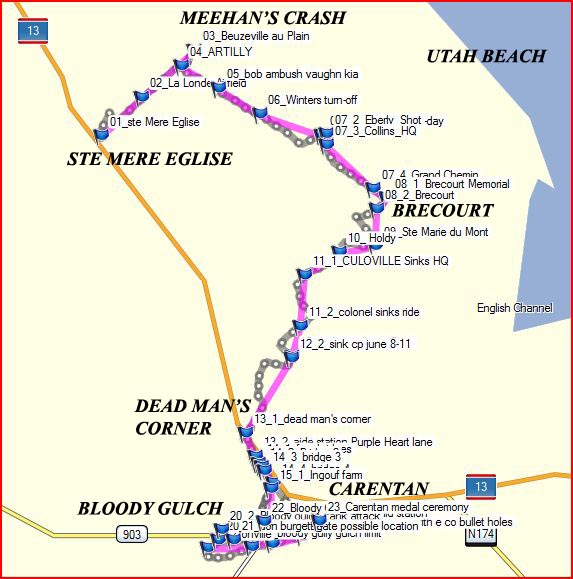 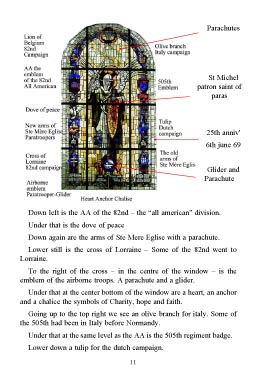 Starting at Ste Mére Eglise, where Richard Winters, Don Malarky and others landed, you'll learn about men of the 101st and 82nd who were missdropped over the town and the real story of John Steele and Ken Russel. Visit the church with the first stained glass window to feature paratroopers.
The church still bares scars of the battle
A visit to the Airborne museum is highly recommended.
The tour then goes past one of the first of over 50 airfields set up by the allies, onto where Lt Meehans plane was shot down. Backtrack to the farm that the German convoy, "attacked" by easy co, came from and on to the site of the attack, which wasn't quite as Ambrose portrayed it.
Passing by the rough track that they went along to stay with Lt Col Cole and his men, on to the farm searched by Winters on the way to their objective.
In the same area several other notable actions happened.
You'll then pass by the HQ of general Collins of the 4th div, and then the CP of Col Strayer to the memorial of Brecourt manor. The depiction of this attack in the mini series was one of the highlights of the series. One could beleive it was filmed on site, but of course it wasn't. Down the track is Brecourt manor still with battle scars visible. 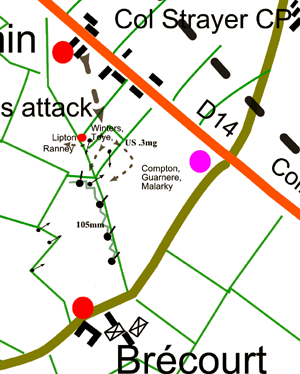 Ste Mere Eglise, where we started, was the 82nds town. Sainte Marie du Mont was the 101sts town. There were several remarkable events here. Also a good place to lunch.
Another daring attack on a gun battery was carried out at Holdy, where you'll go next, but it's less famous than Brecourt. Farther down the same road is where Easy co spent their first night in Normandy.
Colonel Sink had an amazingly close escape driving amongst a company of German soldiers. You'll drive along the same road up to the church where two medics treated 80 american, german and civilian casualties in a church.
Next stop "Dead man"s corner". You'll learn how it got it's name, and visit the museum it holds if you wish.
The mini series gives the impression that the Band of Brothers took Carentan. They were there, but the main brunt of the attacks was supported by Cole's men of the 502nd. Driving along the purple heart lane, you'll appreciate the sacrifice they made.
The Easy co went along the same causeway on the night of the 11th June. You'll be at the site of their entry into Carentan on the 12th. 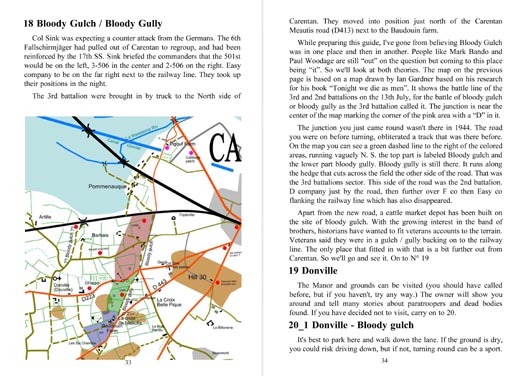 The battle of bloody gulch was the culmination of their actions in Normandy. There is still some argument about exactly where it was, so you'll visit both sites. Another optional, and worthwhile visit, is to the manor of Donville. 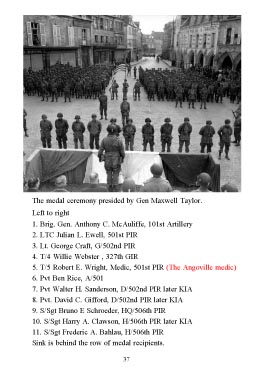 Finally we'll go into the center of Carentan where a medal ceremony ended in grief.