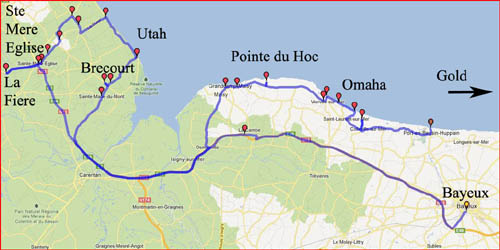 The tour starts at Bayeux by the Ornano coach/car park which is on the southern ring road near the tapestry and cathedral. On the way to the first stand you'll pass by some WWII tanks and the British cemetery.

Our first stop is at La Cambe german cemetery, This visit allows you to appreciate the contrast between this cemetery and the American cemetery that we visit later on in the day. You'll hear why those groups of 5 crosses are there and what the significance of the tumulus and statues is. From here back onto the highway to continue towards Sainte Mere Eglise 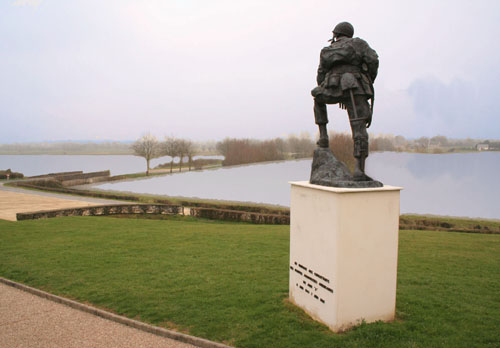 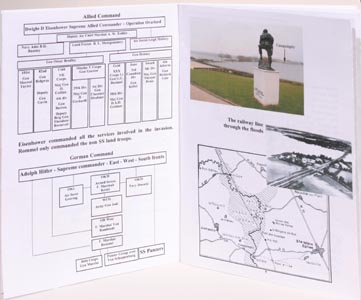 We wont stop just now at Ste Mere Eglise, but carry on to La Fiere causeway. This site was the theater of a three day battle to capture this vital causeway which crossed this valley which had been flooded by Rommel. It's quite a story to recount.

The statue which keeps vigil over the valley is a copy of the one at fort Brag. It was made in the bell foundry in Normandy. 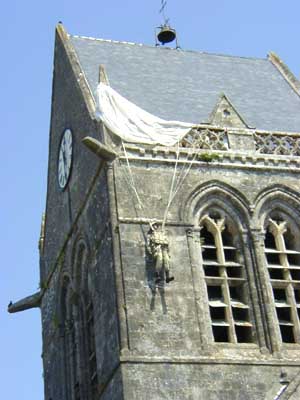 Now back to Sainte Mere Eglise. Like La Fiere this town was part of the trajectory of the forces coming into Utah beach. The dummy hanging on the steeple is at the place that John Steele got caught up on. This town was witness to great dramas and surprising lassitude on the part of the Germans. You'll hear about the other paratrooper who was caught up on the roof and the trooper who saved them both.

With the anotated photo in the guide I'll tell you about the stained glass windows in the church and where to find the machine gun bullet marks. 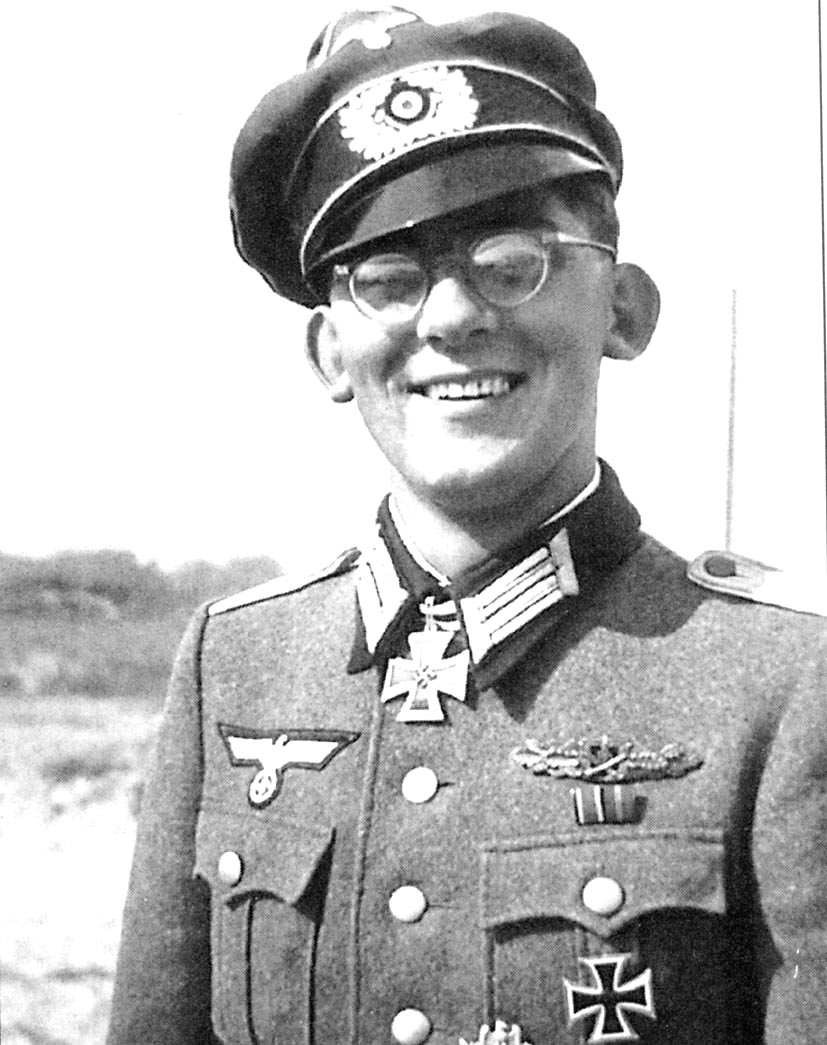 On your way to Utah beach you'll pass the site of one of the first allied air field set up in Normandy, then a memorial to Captain Meehan, and stop a few minutes by the site of a POW camp setup for the German prisoners. 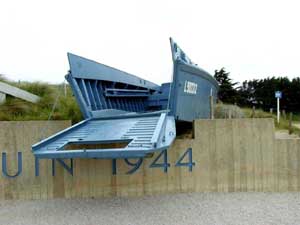 At Utah beach you'll start to see the whole magnitude of operation Overlord. Looking across the estuary of the Vire we can see Pointe du Hoc just 9 miles away. But by road, as you will have to go, it's 25 miles. Omaha beach is out of sight, as are Gold, Juno, and Sword beaches. Sword beach being 55miles away.

Utah was not so difficult as Omaha. The paratroopers falling just inland had done a great job of easing the way. Utah was the starting point for the conquest of Cherbourg, a large port that the allies needed for their logistics.

Utah was where Gen Roosevelt came in and a Capain Mabry who stepped on a mine but found the Paratroopers anyway. 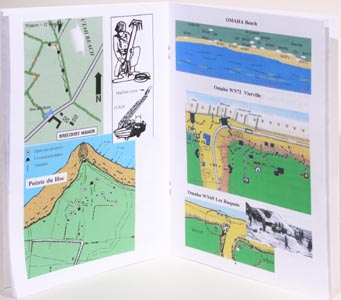 If you've seen the series the Band of brothers you'll remember the gun battery that they knocked out near Sainte Marie du Mont. The tour takes you to that manor house and you'll have the account of Cartain Winters skillfull attack. Then, on our way to Pointe du Hoc, you'll hear about the attack on Carentan by the 101st paratroopers. 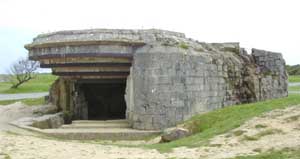 Pointe du hoc was one of the great feat of arms of D-day. It seemed impossible that the Rangers would scale those 100ft high cliffs to capture the gun battery. The site has been left practically as it was nearly 70 years ago. 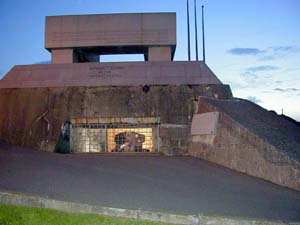 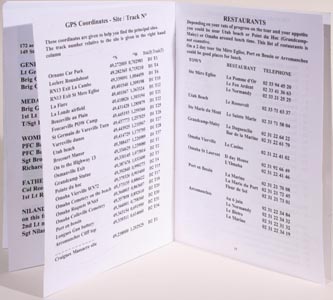 A few miles further along the coast we come to Omaha beach - the bloody beach. An 88mm gun is still in it's casemate overlooked by machine gun emplacements in the cliff top. This gun could fire the whole length of the 4 miles of beach. Further along, the site of the first cemetery on the beach before passing the statue 'the brave' and then to first exit off of Omaha on D day. 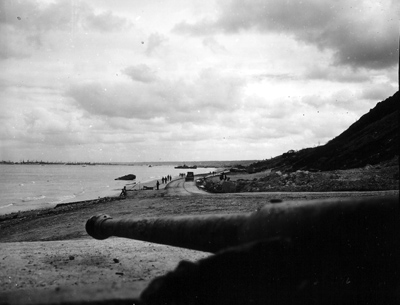 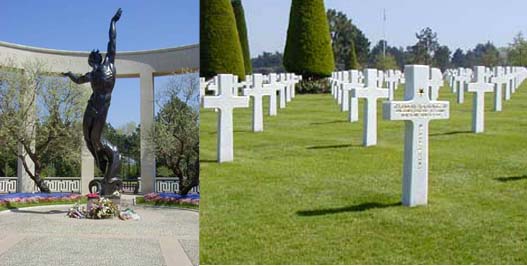 The American cemetery closes at 6pm from mid april to mid september, 5pm otherwise. If you are in before the gates close you are OK to visit. The exit is by a different gate. In stark contrast to the German cemetery this cemetery has an atmosphere of victory with it's 10000 white marble crosses. I'll point out the grave of Roosevelt and the "Private Ryan" graves. 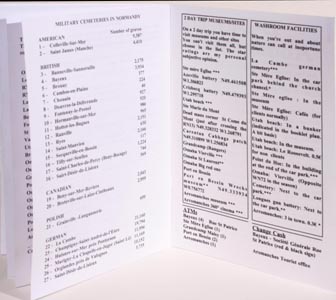 To finish the tour we'll continue towards Port en Bessin then to Bayeux.

Along the way you'll read about many other sites and anecdotes.

This battle of normandy tour fills a day (you can do it over 2 days) and covers 105 miles with 14 stops. It gives you an introduction to D-day, information on 29 sites that you pass and an overview of what you've visited during the tour.